Tiled Orbits is a system agnostic space station and sector generator that uses a double six set of dominoes and your imagination.

Another question. When drawing a residents tile, and it doesn't share a side with any of the open sides of the station nor star tiles, then there's no "connecting side determines the result." I assumed when the star tile can't connect to the station tile, that means there's two stars in this system. Should I assume when the residents tile can't connect to station not star tiles, thereare two different groups of immigrant residents? Or one group that's a hybrid of two types?

I.E. station tile 1:1, star tile 3:4, residents tile 0:2.   This describes an observatory in a white dwarf + yellow dwarf binary system(?), with immigrant/visitor residents that are artists, military, or militant artists / artistic military, or two separate groups one artists the other military?

I have some questions.

I think this is a clever idea for a story-telling game.

Hi thanks! I’m happy to help answer questions. To make it easy, I listed them after your bullets:

It does not need to be a double number tile. I mostly included that so that folks understood tiles should be built around a hub.

This is a solo game but I’m thinking about building this into a larger system. You can build “trains” off of the station, Star and other tiles. It’s really only Mexican Train in the loosest possible sense.

it should be placed in the solar system area by itself and thought of as a separate planetary entity.

yes! It is a typo. I will reupload to address this.

Any of the hubs. For example, say it can only connect to the star, the threat is coming from the star and you can think about why. If it only connects to a loose resource tile that couldn’t be placed anywhere else, how is the threat related to the resource. 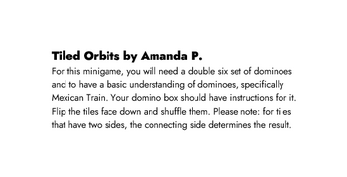